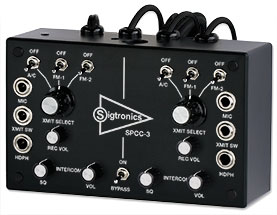 Now let your mission dictate the aircraft you use, instead of letting your communications requirements do it for you. The SPCC Portable Communication Controller allows pilot / observer mission teams the ultimate flexibility to monitor and transmit in any aircraft simultaneously on multiple radios with air traffic control, multiple non-aviation ground stations, or each other — all at the same time in a completely portable package.